E-bikes have exploded in popularity over the last decade as cyclists look for new ways to commute, exercise, and have a good time. Whether you are an experienced mountain bike rider or a casual city rider there is an e-bike option for you. The rising demand for these electric motor-powered bicycles has caused many new and old bicycle manufacturers to start producing and selling e-bikes to an excited community of cyclists of different skill levels and backgrounds.

EBike Press has assembled a comprehensive list of e-bike manufacturers across North America and Europe which includes a variety of e-bike options for all different cyclists’ needs.

Los Angeles-based Aventon is an e-bike manufacturer with a mission to “empower everyone to ride bikes regardless of their age or ability.” The company focuses on creating quality e-bikes with rookie and experienced riders in mind. Aventon recommends the Pace 350 e-bike for casual riders and the Pace 500 for experienced riders looking for maximum speed.

Founded in 2015 Benno Bikes is an e-bike manufacturer that specializes in a hybrid version of traditional e-bikes and Cargo e-bikes. The San Diego-based company strives to make e-bikes that have utility and maneuverability.

Oregon bike manufacturer Bike Friday is a second-generation family business operating since 1992. They craft bikes with the environment in mind. They manufacture e-bikes for city streets and open roads.

Bimotal does not manufacture their own e-bikes but they do sell conversion kits meant to turn your traditional bicycle into an e-bike. Perfect for any rider who loves their bike and wants to convert it.

Blix was founded in 2014 with the goal of “empowering people to live healthier lives.” Blix specializes in e-bikes for the casual city or trail rider looking to get out and get moving.

Buzz manufactures e-bikes with the mission of making every adventure easier and eco-friendlier. The Dayton company offers a variety of e-bike options for casual riders and even offers e-tricycle options for those looking for an easier ride.

Day 6 Bicycles are the ultimate comfort e-bike and are perfect for anyone who is uncomfortable sitting on a traditional bike seat. Day 6 Bicycles feature a wide range of ergonomic comforts such as lumbar support, wide seats, low step-over bar, and easy-to-reach handlebars. They offer a number of comfortable e-bike options which are powered by Bafang Motors which are known to be dependable, quiet, and powerful.

Eahora started manufacturing electric vehicles in 2006 as a means to create an environmentally friendly transportation option. They offer all styles of e-bike and use Samsung batteries.

E-Cells is a veteran-owned e-bike manufacturer that is known for its two-motor system which means the motors allow you to bike longer and move faster. E-Cells features a bike that goes 32 MPH as opposed to the standard 28 MPH.

e-Joe Bike company has been manufacturing e-bikes for over a decade. The company strives to build e-bikes that can be used by all riders. E-Joe even offers a fleet program for commercial and industrial use.

Electra started making bikes in 1993 and got into the e-bike market in 2013. Their signature bike the “Townie” has won multiple e-bike awards.

Electric Bike Company prides itself on being made in America. Every e-bike from EBC is “100 percent designed and built” in Newport California.

Founded in 2011 Evelo started creating e-bikes as a means to help people become less reliant on cars. The company considers e-bikes to be the most practical, fun, and cost-effective way to travel. Evelo has a variety of e-bike options including e-tricycles.

Flaunt was founded in 2013 as a means to create stylish and affordable eco-friendly transportation. The company features two e-bikes that work for all styles of riders. Flaunt’s motto is “the first e-bike for everyone.”

Himiway is a North American bike manufacturer that specializes in tough all-terrain e-bikes. Himiway strives to make bikes that can withstand the beautiful but tough American terrain.

Lectric E-Bikes is a brand new company based in Phoenix Arizona. Despite just coming up they are making a name for themselves with their “Lectric XP” model which won Electric Bike Review Top Choice Award for “Best Folding Electric Fat Tire Bike” in 2020.

Mountain to Sea Electric Bikes is a manufacturer that specializes in all-terrain e-bikes so you can enjoy a ride on a mountain trail or a sandy beach.

MOD Bikes is considered the “Swiss army knife of e-bikes” the company’s ability to make e-bikes that balance design, versatility, and comfort while being durable enough to appease the most active riders. The Texas company offers e-bikes meant for the city commuter and come in different types such as foldable e-bikes, cargo e-bikes, and city e-bikes.

Pedego Electric Bikes is one of the largest e-bike distributors with over 200 stores across the United States and Central America. Pedego offers e-bike rentals as well so they are the perfect company for people who may be on the fence about e-bike ownership.

Qualisports manufacturers a foldable e-bike that is perfect for city riders.

This rough and tough e-bike manufacturer created an e-bike specifically for hunters, fishers, and campers. Rambo Electric Bikes is the perfect bike for anyone who likes to live off the beaten path.

Rad Power Bikes founder Mike Radenbaugh built his first e-bike in 2007 as a means to create a faster commute to his high school. He founded Rad Power Bikes in 2015 and the company is now the largest seller of e-bikes in the United States. They offer a variety of e-bike options such as commuter bikes, cargo bikes, and step-thru bikes.

Andy and Goldie Roberts started S.A.M.’s Bike Company as a means to help Andy continue to exercise after surviving stage-4 lung cancer. The family-owned company loves e-bikes because they give people with health issues a chance to keep riding. S.A.M.’soffers a variety of e-bikes.

Soul Beach Cruisers was started by a former BMX and Motocross rider. The company specializes in beach e-bikes.

This big city e-bike manufacturer creates bikes made for the big city. Wing Bikes creates light, weight, fast, and durable e-bikes perfect for the urban commuter. The bikes even have a built-in alarm system for theft prevention.

Dutch bike manufacturer BABBOE has been in the industry since 2007 and got into e-bikes in 2009. BABBOE specializes in affordable cargo bikes. Cargo bikes are perfect for riders who want their kids or pets to tag along.

This Danish manufacturer specializes in cargo e-bikes making them perfect for families, pet owners, and couriers. Butchers and Bicycles ask riders to “imagine a world without cars.”

Butchers and Bicycles kits and accessories

Charge got its start in 2004 building traditional bicycles. They have now put all of their focus into crafting the best e-bikes. Unlike most bike manufacturers, Charge ships your e-bike to you fully assembled.

Focus prides itself on creating beautifully crafted and German-engineered bicycles. The companies team of engineers have crafted e-bikes for mountain bike, road, and casual riders.

German manufacturer Haibike has been a believer in e-bikes since 2010 when they manufactured the “XDURO FS.” Haibike claims they were one of the first to design e-mountain bikes.

This German manufacturer is perfect for riders looking for a comfortable recumbent e-trike. Hpvelotechnik’s S-Pedelec Scorpion can reach max speeds of 28 MPH.

Moustache Bikes is an e-bike manufacture with over 65 e-bike designs. The French company was named after the well known style of bike handle bar called the moustache handlebar.  Moustache even offers an e-bike for kids.

This Dutch manufacturer specializes in cargo e-bikes so they are perfect for family rides or if you need to transport a lot of items. Urban Arrow is “the right bike for every cargo.”

URWAHN is a German manufacturer that specializes in e-bikes made with 3D printing technology.

VanMoof is a Dutch manufacturer with e-bikes for urban riders. The company provides theft prevention services and maintenance plans for its riders.

Did we miss somebody?

Please send us the information and we will be happy to update our information. 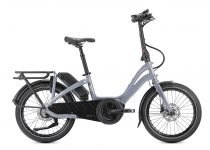