The pilot leased more than 100 e-bikes to Detroit essential workers over a one-year period to provide them with greater access to transportation and increase the use of e-bikes for commuting and recreational cycling. Detroit workers were able to lease the bikes for $15 a month.

The e-bike leasing program saw relatively positive outcomes with 79 percent of program participants saying the e-bikes served their transportation needs well and 77 percent of respondents said they were either satisfied or dissatisfied.

Participants reported a 17 percent increase in commuting to work by e-bike; however, the study notes that an increase in employees working from home may have contributed to this number not being higher. Despite the increase in e-bike use a car was still the preferred form of transportation for most participants.

The participants also reported an increase in e-bike usage for more than just a work commute. There was a 19 percent increase in participants using their e-bikes to run errands while recreational riding was up 10 percent.

Despite the success of the program participants claimed that barriers still existed that make them not want to ride an e-bike. Inadequate safety while commuting, weather, and inadequate biking infrastructure along routes are all the main reasons why participants would not consistently use an e-bike to commute. 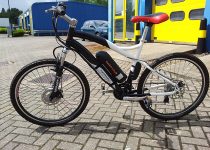